What Motherhood Taught Me about Empathy that My PhD Didn’t

It took me a while to figure out. What had I learned about empathy from my baby that I didn’t already know from years of research on the topic? But a few days ago it hit me.

Two months ago, I was a guest speaker at The Corporate State Toronto, a summit that brings together C-suite executives and thought-leaders to discuss global trends that will have big implications for business and society. I was the empathy expert on a panel called “Emotional Dislocation” that explored the tsunami of change coming due to advances in robotics and AI (artificial intelligence). (Curious to learn more?)

It was the first time since giving birth to Annika that I wore a pair of heels and found myself in a women-only space with everyone wearing power suits, not yoga gear. So, yes, I was feeling intimidated – at first. But then we started discussing how machines were besting human cognition and closing in on our affective capacity (aka the ability to feel and emote). And that’s when I was back in my comfort zone.

I shared the story of being gob-smacked a couple of years earlier at a McGill event called University 2050, in which a group of 100 interdisciplinary Faculty members came together to brainstorm how they should prepare to meet the needs of mid-century students. To get our juices flowing, some cutting-edge research was presented. One presentation shook my world.

As I recall, it involved a team of psychologists, neuroscientists and computer engineers who had developed an on-screen hologram that could decode human facial expressions and respond with emotional mirroring in real-time. Think: Therapist leaning in towards client with empathic expression, reflecting back: “So, what I’m hearing you say is…”

Developed to meet the needs of people suffering, who would not otherwise seek out professional support from a human psychologist, at first, I was stupefied, then aghast. How on earth could a few hundred (thousand?) lines of code approximate the empathy required for human connection in a therapy session? The late Carl Rogers – a founder of the humanistic approach to psychology – must be turning in his grave, I thought. And since this is such an important topic, I promise to come back to it in a future blog. But for now, let’s revert back to the Emotional Dislocation panel.

I shared the stage with six extraordinary women that day, one of whom was Jane Francisco, Editorial Director of the publishing powerhouse Hearst Lifestyle Group and Editor in Chief of Good Housekeeping. Once the panel’s Q&A was over, she asked if I would consider writing an article for her magazine, brainstorming aloud: “Maybe something about what motherhood has taught you about empathy?” (I had mentioned being on mat leave in my opening remarks.) Sure, I replied.

Now, circling back to the main point of this blog.

Since my family has been living in the Dominican Republic for the past few months, my daughter’s first word was “hola,” Spanish for hello. And before you get any ideas about us living a posh life, let me be clear that my hubby and I are currently jobless, and homeless to boot, with all our personal belongings stacked up in a storage locker. Another blog, for another day!

But Annika doesn’t just say hola. She hollers it from the rafters, accompanied by the sweetest hand-waving you’ve ever seen (the kind that involves little fingers opening and closing into a fist), and sometimes even kiss-blowing.

So, yes, you bet there’s untold pride and joy in being the mom of a little girl who regularly lifts the spirits of total strangers with her warm greeting. But I’m always surprised by the ensuing exchange. Most people light up and put all social pretence aside, waving right back at her, grinning ear-to-ear. Others are more reserved. And a handful ignore her altogether – which always makes me feel a little sad, because I wonder what’s going on in their world to inhibit at least a smile.

But more salient than people’s reactions to Annika, is her willingness to greet anyone. I’ve watched her hola to men, women and children. Tall and short people. Gay men, female prostitutes. Black and white people – and all shades in between. Bald men, toothless men and homeless men. Women in dresses, bikinis and hoodies. With or without tattoos. You get the point. 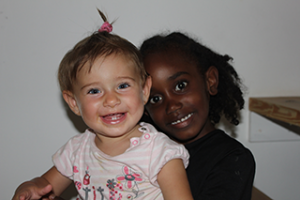 Annika with her Dominican friend, Yobanna. Color-blindness – at least for now – prevails.

I know it’s cliché, but Annika has no social filter – yet – with which to judge people based on their gender, race or appearance. And it’s that yet part that offers the teachable moment. Again and again and again.

As an empathy scholar, I’m all too aware of the intergroup bias (or in-group favoritism) that develops between humans to separate “us” and “them” and diminish our innate capacity to empathize. The implications of which cannot be understated. For example, I wonder (and worry) if my bi-racial six-month-old niece will be viewed as “less innocent” than her all-white peers by the time she’s five. Sadly, research says so. Worse, the implications can be life and death. (Have you seen this gut-wrenching Trevor Noah piece?)

But we are not born that way. 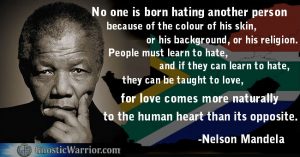 So, one thing motherhood has taught me about empathy that I didn’t learn from my PhD: I must be hyper-vigilant about how Annika learns to navigate the world of personal identity. Because if I’m not on top of her learning – and unlearning – society will teach her.

Anita Nowak, PhD is an empathy expert and author of The Empaths Strike Back. Watch the book trailer and pre-order a copy: anitanowak.com