The Art of Empathy 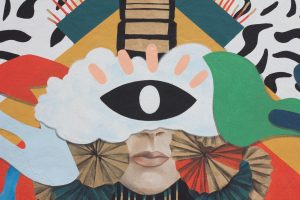 I know it’s gauche to admit this, but I don’t love museums. First, I don’t know enough about art to appreciate the experience. Second, I dislike the idea that a small group of art critics and curators get to decide what has aesthetic value. Third, I’ve been tainted by a museum visit.

Picture it: I’m in my early twenties backpacking with a boyfriend and we’re in the National Gallery of Australia. One wall features a huge canvas, painted entirely black, entitled “Untitled.” Seriously? How did that get to hang in a national gallery when I could have painted it with my eyes shut and a brush clenched between my teeth? I remember thinking Andy Warhol had it right: “Art is what you can get away with.”

(As an aside, not long ago, a banana taped to a wall sold for $120,000 – even though the performing artist ate the banana! Turns out the whole thing was part of a money laundering scheme. But I digress.)

At the same time, I am regularly moved by creative expression and works of art. For example, I am mesmerized watching professional tango dancers. And transfixed by the billowing sound of Handpans. The scene in which Captain von Trapp kisses Maria in The Sound of Music leaves me swooning – every time. I also feel profound disappointment looking into Abuela’s eyes (a piece my husband was inspired to paint in Cuba after being reminded of the empty store shelves he grew up with in communist-led Georgia). Which brings me to empathy.

Back in the middle of the nineteenth century, German philosopher and radical political activist Friedrich Vischer (1807-1887) found it “morally reprehensible and dangerous” that so-called objective state-sponsored interpretations of art were dominating his country’s aesthetic discourse. Instead, he claimed that subjectivity was inherent to its interpretation. Building upon his father’s ideas, Vischer’s son Robert (1847-1933) introduced the German word einfühlung (feeling into) to describe the projection of feelings onto aesthetic objects.

In 1909, American psychologist Edward Titchener (1867-1927) translated einfühlung into the English word empathy, derived from the Ancient Greek word ἐμπάθεια (empatheia). To him, empathy meant the process of humanizing objects or feeling ourselves into them.

Shortly thereafter, German philosopher Theodor Lipps (1851-1914) popularized the current meaning of empathy by arguing that an unconscious process of ‘inner imitation’ explained “not only how people experience inanimate objects, but also how they understand the mental states of other people.” This idea was hotly contested at the time, but less than one hundred years later, neuroscientists discovered ‘mirror neurons’ which work precisely to help recognize another person’s emotional states. So, Lipps was right.

Of course, artists across the world have known this all along.

In his famous essay “What is art?” Leo Tolstoy argued that being infected by what others are feeling is the whole point: “Art can help people to see their differences in the context of our common human experiences. Everyone suffers, everyone loves, everyone craves beauty, and everyone grieves.” Likewise, Albert Camus, French-Algerian philosopher and recipient of the Nobel Prize in Literature believed: “The first thing for a writer to learn is the art of transposing what he feels to what he wants to make others feel.”

What’s cool these days, is thanks to neuroscience, we have proof that art engenders empathy and highly empathic people experience art differently. In one study, researchers scanned the brains of college students using an fMRI machine while they listened to short pieces of music. Highly empathic people tended to have significantly higher activation in their brains and found listening to music more pleasurable than people with low levels of empathy. According to Musician Diane Miller, the corollary is also true: Music appreciation can Increase empathy.

In another study, Israeli film scholar and neuroscientist Gal Raz collaborated with a team of neuroscientists. They placed subjects into an fMRI machine, showed them film clips and measured the blood variation in their brains. One clip included the harrowing scene from Sophie’s Choice, when the protagonist is transported to a concentration camp and forced by a Nazi officer to decide which of her two children, a boy and a girl, should be killed so that the other may survive. The study showed that the limbic center of the brain, responsible for empathic grief, was highly activated during the viewing of that scene.

I recently sat down with Elif Gocgikdem for my Purposeful Empathy podcast and Youtube series. She is an Islamic art historian, museum scholar and the editor of Fostering Empathy Through Museums. In our conversation, she spoke about her latest book Designing for Empathy which describes how we can intentionally create spaces and contexts for empathy to emerge.

By reading more of her work, I came to learn that museums can increase empathy in five ways: 1) By holding a mirror to society; 2) as a form of story-telling; 3) by creating experiential learning opportunities; 4) by promoting awe and wonder; and by providing a safe space for contemplation. In light of this, maybe I ought to give museums another chance.