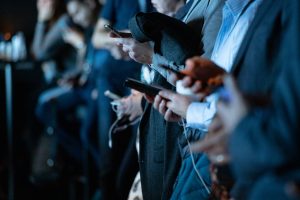 Remember back in the spring when everyone was glued to their phones as COVID spread across the world? Even though the news was grim, we felt compelled to keep swiping through our social media feeds. There’s a new term for that called doomscrolling. It’s as awful as it sounds, but social media companies are laughing all the way to the bank. After all, holding our attention (even to the point of addiction) is embedded in their business model.

More than 70% of the time we spend on Youtube is driven by “what our recommendations engines are putting in front of you,” says Chief Product Officer Neal Moha. And since the suggested videos are meant to grab and hold our attention, they tend towards vanity, fear and extremism – on purpose. According Jamil Zaki, Associate Professor of psychology at Stanford and author of The War for Kindness, “the result is a massive flow of eyeballs to conspiracy theories, bigotry, and aggression.” Sound familiar?

I recently watched an illuminating talk by Tristan Harris, a former design ethicist at Google. He left the company to launch the Center for Humane Technology which claims that “extractive technology” takes advantage of our human weaknesses and gets more effective at hurting us as it grows more sophisticated. His bottom line is that social media harms our mental health, relationships and democracy – and leads to “human downgrading.” If you want to be truly spooked by how nefarious social media is, watch this trailer for The Social Dilemma on Netflix.

A couple of years ago, I spoke about the social impacts of new technology in a TEDx talk and made the case for why empathy matters more than ever. Given social media’s omnipresence, here are a few ways I believe our collective empathy is being eroded, supported by leading-edge research:

Our sympathetic nervous system is chronically overwhelmed thanks to the deluge of stimuli we face daily, including a 24-7 media diet that lives by the dictum, ‘When it bleeds, it leads.’ Harvard professor of psychiatry, Helen Reiss, explains: “If you are exposed to too much pain and suffering every day… excessive emotional empathy can lead to depression, anxiety, and burnout.”

Often described as the “cost of caring,” compassion fatigue is known to diminish one’s ability to empathize with others. A study from The University of Rochester found that after seeing a tragic story multiple times, people no longer felt moved to step into someone else’s shoes.

According to Paul Slovic, a psychologist who has spent six decades studying why the world often ignores mass suffering, the larger the number of people in distress, the more ‘psychic numbing’ we experience. His research even suggests that our capacity to empathize decreases when the number of victims in a tragedy goes from one to two.

According to research, cyber-trolling is a relatively new form of everyday sadism. Surprisingly, however, it’s not devoid of empathy. Quite the opposite. “Trolls employ an empathic strategy of predicting and recognizing the emotional suffering of their victims while abstaining from the experience of these negative emotions,” assert researchers Natalie Sest and Evita March. That’s why Lisa Margonelli, author of The Weaponization of Empathy in a Hyper Connected World believes trolls deploy a sinister form of “empathology.”

That said, sometimes trolls can find redemption. In a heartwarming TEDx talk Empathy is not an Endorsement, Dylan Marron describes how he responded to internet hate after his project Sitting in Bathrooms With Trans People went viral. To him, “Sometimes the most subversive thing you [can] do [is] actually speak with people you disagree with, not simply at them.” But let’s face it, the majority of trolls want to hurt others. And the fact that online trolling is largely anonymous doesn’t help.

In their Online Harassment study, The Pew Research Center found that “92% of Internet users agreed the online environment allows people to be more critical of one another, compared with their offline experiences.” And unfortunately, the most likely victims are young adults, especially young women:

Young adults (18-29) are more likely than any other demographic group to experience online harassment.

Young women (18-24) experience certain severe types of harassment at disproportionately high levels: 26% of these young women have been stalked online, and 25% were the target of online sexual harassment.

Given the algorithms that determine the landscape of our social media echo chambers, it is no surprise that the number of Americans who see the opposing political party as a threat to “the nation’s well-being” has doubled since 1994. Of course, not everyone agrees that social media has led to greater political polarization, including Vox co-founder Ezra Klein. But I certainly do.

Confirmation bias is well established in the field of psychology, and refers to a tendency to seek out information that confirms our pre-existing beliefs. Once social media platforms know our preferences, they curate content that aligns with our worldviews, and over time, this self-perpetuates until we are nearly exclusively exposed to ideas that match our own.

This drives polarization – which by itself is problematic – but increasingly, digital technology is being used as a highly effective recruitment tool for radical groups. Julia Ebner, a counter-extremism expert at the Institute for Strategic Dialogue in London, spent two years undercover infiltrating far-right networks. In the introduction of her book, Going Dark: The Secret Social Lives of Extremists which chronicles her experience, she writes: “The radicalisation engines that today’s extremists are building are cutting edge: artificially intelligent, emotionally manipulative and socially powerful.”

Two years ago, the world’s first Minister of Loneliness was appointed by the UK to combat one of the greatest public health challenges of our time. According to a meta-analysis, lack of social connection heightens health risks as much as smoking 15 cigarettes a day or some kinds of alcohol abuse.

One U.S. study found that loneliness levels in 2018 reached an all-time high, with nearly half of 20,000 adults reporting they sometimes or always feel alone. Another study revealed that the percent of high school seniors who said they often felt lonely increased from 26 percent in 2012 to 39 percent in 2017.

Now, due to COVID-19 mandated social distancing and the absence of physical touch, rates of depression, anxiety and addiction are spiking. It would appear that despite 24/7 digital connectivity, we are desperate for a sense of communion and belonging.

All that to say, when it comes to social media and empathy, I think of another famous research stat: In any relationship, it typically takes five good interactions to make up for a single bad one. What if that ratio holds true for social media too. For every minute (or hour) we spend comparing ourselves to others, falling down a Youtube rabbit’s hole or getting psychologically hijacked by a mean comment some stranger posted, we need to spend five forest-bathing, laughing with children or sending a hand-written birthday card through the snail mail. I bet if we all did that, empathy would make a major comeback.