Lily scored with Carey Price – can she do it again with Ellen DeGeneres? 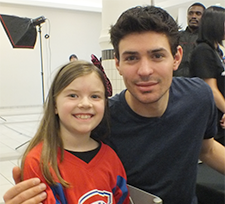 John Wood is a long-time empathic action hero of mine. Oprah loves him too. He’s the founder of Room to Read, an organization that “seeks to transform the lives of millions of children in developing countries by focusing on literacy and gender equality in education.”

I met John nearly a decade ago while doing my doctoral research about empathy and social entrepreneurship and we’ve stayed in touch.

One day a few years back, I organized “friend-raiser” luncheon for him. After sharing his “Bold Goal” to impact the lives of 15 million girls by 2020, he sat back, looked at me across the table and smiled. Then, instead of asking my guests for a donation, he said: “Anita, what are you going to do to help more girls go to school?”

To be honest, I was stunned. Everyone sitting at that table had deeper pockets. But clearly he knew what he was doing, because his question got me seriously thinking about how I was going to step up.

My 40th birthday was fast approaching and I was hosting a party. So, I decided to raise enough money to fund 40 scholarships – which meant raising $10,000, something I definitely could not do alone. So, when the party invitations were sent out, I challenged 40 friends to become “Empathic Action Champions.” If each one raised $250, we’d collectively meet the $10K target and send 40 girls to school. 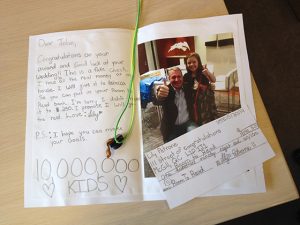 My friend Heather and her daughter Lily did more than rise to the occasion. Upon receiving my invitation in the mail, Heather sat down with her then 9-year old daughter and explored the Room to Read website. That’s how Lily learned that many girls her age – 60 million of them worldwide – were not in school. A fact that upset Lily so much that she was inspired into empathic action.

Initially, the plan involved selling charm bracelets, but sales were soft. Then, she had an idea to reach out to Carey Price, superstar goaltender for the Montreal Canadiens. Her parents thought the idea outlandish, but Lily was a believer. And sure enough, he came through. With his help, she was able to raise over $7,000 for Room to Read.

But the story doesn’t end there.

I recently had a chance to catch up with Lily, who is now a precocious tween. (In fact, she’ll be turning thirteen in a week.) Inspired by her fundraising triumph, and the impact it had for girls like her, Lily’s launching a new campaign. But this time she wants to enrol Ellen for support. And if I had to place a wager, my money would be on Lily succeeding.

May 15 is the United Nations International Day of Families. The theme this year is Families, education and well-being and the goal is to “raise awareness of the role of families in promoting early childhood education and lifelong learning opportunities for children and youth.”

As such, I’d like to salute Heather for having opened up the world of philanthropy and social impact to her daughter Lily – especially at such a young age. The small act of visiting Room to Read’s website led to a great mother-daughter project that inspired engagement from Lily’s entire school. I have no doubt the lessons learned from that experience will stay with her throughout life.

As for the girls who received scholarships thanks to the funds Lily raised, well, I imagine their lives will also never be the same.