How to build an #EmpathyGeneration

January 2017, North London. I could hear a group of sixteen year-olds climb four floors of the school’s science building to reach my classroom, chanting: “U gang, U gang, U gang!”

My class was composed of twenty-one boys. Boys only – a decision made by senior leadership to put all the “disruptors” together so they wouldn’t impede other students from learning. The boys called themselves the “U gang” because each one had failed their UK national exams.

To me, their chant was a cry for help from a group that felt unwanted and unloved. Young men who were lost, and would rather fail and say “I didn’t bother trying” than try and fail, because that would then mean they really were a failure.

Looking back, it’s interesting to analyse how I taught this group of young men. I didn’t know it at the time, but now I see that empathy saved the day.

My biggest tool was basketball. A player myself, it was a common ground between me and my students. Not only would I sometimes take them outside to play during a lesson (where there was a scientific point to be made of course, i.e. respiration and homeostasis). I also used motivational videos. Videos that inspired them to work harder by seeing role models talk about the effort they put into their success, like this one.

Day by day we turned things around. I learnt about their likes, their dislikes, their families, what music they listen to, what they wanted to do when they got older. I also coached many of them in the school basketball team, a crucial part of me getting to know them beyond the classroom, to build trust, to earn respect and to become a member of their team – on and off the court.

Fast forward three and a bit years later. I’m a filmmaker and founder of Empathy Week – a global school program that utilises the power of film to build and develop students into resilient and empathic leaders. 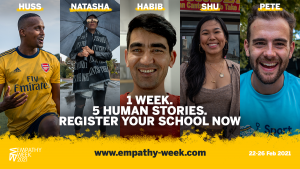 Every year, 5 beautiful films of 5 individuals are shown to students across the world and teachers use our age-differentiated activities and lesson plans to develop the skill of empathy. We then offer a platform for students to undertake their very own ‘Empathy Action Project’ to design and lead a project that benefits their local and/or global community.

Empathy Week has taken place twice – in 2020 and 2021 – across 40+ countries and 6 continents, with hundreds of schools. The most common feedback we get: It allows students to talk about issues that affect their lives, as well as learn about other’s lives and perspectives. Empathy Week is creating space for students and teachers to discuss how they feel about social issues that affect them. It also propels them into action with empathy.

It’s amazing to see how our program is used across the world in different countries. Take a look at our virtual Empathy Wall to see the start of our mission to develop the #EmpathyGeneration – a generation of students that leaves school equipped with resilience, empathy and leadership.

My experiences teaching still guide my mission today. I understand that students need opportunities. They also need permission to take up space and be given agency. I believe the current education system spends far too much energy pushing the agenda of academic achievement (though still vital and important) as opposed to truly guiding children and young adults into being holistically content, emotionally intelligent and skilled human beings.

I inherited the U gang a little too late. One missed his Chemistry exam because he was in police custody. But I believe if the U gang had experienced Empathy Week, some of them would have been inspired to see the world around them in a different light. For example, how might they have thought differently about themselves and their lives if they had watched the film about story of Habib (pictured below)? 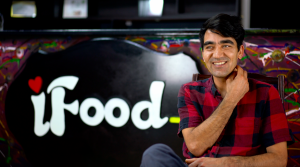 The story of Habib (pictured) one of the five films for Empathy Week 2021. An Afghan refugee who served in the Afghan military fighting the Taliban for many years before having to flee the country with his family and make the journey on foot to the UK where he was eventually granted asylum.

His story is one of the five films that was featured during Empathy Week 2021. An Afghan refugee, who served in the Afghan military fighting the Taliban for many years, before having to flee the country with his family, and make the journey on foot to the UK where he was eventually granted asylum.

My hope and vision is that every child in the world will one day take part in Empathy Week. Not just for one year, but throughout their entire academic journey, since the power of the program lies within the longevity of its delivery. If a child who is 5 years old this year takes part in Empathy Week every year until they’re 18 years old, they will have watched and experienced 65 different people’s life stories. 65 different people from around the world, from every religion, race, creed and belief system.

It’s hard to be ignorant and hateful when you’ve met the world.

You can watch the trailer for Empathy Week 2021 here and access the films from 2020 here. Schools can register for the program here (free to all publicly funded schools). We’ve worked in partnership with many organisations, including Empathic Intervision.