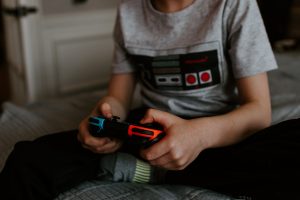 Two things happened in the spring of 1997. I finished my undergrad in marketing at McGill and the gaming giant Ubisoft opened an office in Montreal. They immediately posted openings and I applied for a one as a product manager – in retrospect, a total act of hubris since the only videogame I’d ever played in my life was Tetris, and when asked in an interview about my passion for gaming, I replied honestly that I was not a fan. “How do you expect to sell video games if you don’t play any?” they followed-up. To which I replied: “I don’t wear men’s cologne either, but I can sell the stuff.” Ballsy, I know, but I got the job.

Who knows where I’d be today if I had taken it. According to Newzoo, the global gaming market is expected to generate $150+ billion in revenue this year. That’s twice the size of the global cosmetics industry and three times the global beer market. Regardless, I have no regrets. Between my passion for empathy and low-grade aversion to new technology, hawking videogames was not for me.

That’s especially true today given what we know about the costs associated with gaming. For example, a study published in Frontiers in Psychology, affirms that problematic gaming is related to low self-esteem, depression and anxiety disorders, a lack of real-life friends and loneliness. Another study published by the Journal of Addiction Medicine and Therapeutic Science describes multiple physical health disorders associated with long-term video game activity, including visual impairment, musculoskeletal issues and obesity.

Of course, I’m not condemning all games. Nor am I judging gamers. When two billion people worldwide use a product, I accept that it can’t be all bad. Plus, I’m a proponent of using innovative gamification to improve pedagogy and educational experiences for youth. Especially if there’s a potential to increase empathy. Cue RealLives, the “largest gamified simulation engine of human experience on the planet.”

I was introduced to the game by its Executive Director, Dr. Parag Mankeekar, who recently reached out to me on LinkedIn. Parag is a social technology entrepreneur, former public health professional, trained anthropologist, and Ashoka Fellow. His vision for RealLives is to create a generation of young adults trained in empathy, sustainable development and changemaking. With so much in common, I gladly accepted his invitation for an exploratory conversation, which was converted into an episode of Purposeful Empathy (watch here).

How to play the game: After login, you can either “Design a New Life” by selecting a few character attributes such as gender and country of birth or “Live a New Life” by letting the simulation randomly allocate attributes. Once you’ve made your selection, you are “born.” You can then explore the interface to learn about your new life, including facts about the country in which you live. For my third life, I chose to be born in my husband’s native Georgia. While playing, he was impressed by how accurate the game was about his country’s history, geo-politics and culture.

When you click on “Age a Year,” you will turn one year older. For the first eight years of life, randomly generated events happen to you and your family based on statistically accurate data of the country you were born into (using over 100 big data sets from UNICEF, The World Bank, Amnesty International, etc.). As of eight, you answer questions to control these six aspects of your life: education, career, finance, relationships, residence, and leisure. As you make decisions, the simulator calculates fluctuations in your level of health and happiness accordingly.

Based on different scenarios that play out year-after-year (again, all of which are pulled from real data sets) and the decisions you make, your character will experience life’s ups and downs. What makes the game both fascinating – and empathy-inducing – is that it provides a glimpse into how all our lives are influenced by factors over which we have no control, even if we have freedom to make choices. The first time I played, I was born a boy in India, and before turning five, I died of malnutrition. Compare that to my fourth life which ended after 82 years in Sweden.

Ultimately, RealLives exposes players to how other human beings live across the world in different cultures and socio-economic categories, and how global challenges framed by the 17 UN Sustainable Development Goals have real impacts on human lives. I recommend it highly to educators who want to expand STEM education (Science Technology Engineering Mathematics) into ESTEEM (adding Empathy and Ecology) to create a more rounded model of pedagogy for a 21st century learning. I also recommend it to anyone who wants to flex their empathy muscles. It’s impossible to play the game and not be moved by the experience.

PS If you’re concerned about anyone in your life addicted to gaming, consider attending an event hosted by McGill on November 4, featuring Dr. Jeffrey Derevensky, Youth Gaming: How much is too much?